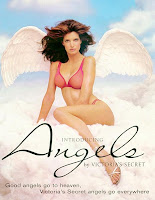 LOS ANGELES (Reuters) - A woman who says she was hurt by her thong panties
when a metal clip flew off and hit her in the eye has sued Victoria's Secret,
saying in a TV interview on Thursday that the injury caused her "excruciating pain."

Macrida Patterson, a 52-year-old Los Angeles traffic officer, told NBC's
"Today" show that she suffered cuts to her cornea from the small piece of metal
that had been used to secure a rhinestone heart onto the blue thong.

"I was putting on my underwear from Victoria's Secret and the metal popped in my eye.
It happened really quickly. I was in excruciating pain. I screamed. That's what happened," Patterson told NBC.

Patterson's lawyer Jason Buccat, who also appeared on the "Today" show, said the metal staple causes
"severe damage" to her cornea that required a topical steroid.

The product liability lawsuit, which was filed on June 9 in Los Angeles Superior Court and first reported
on the Smoking Gun Web site, seeks unspecified damages.

A spokeswoman for Victoria's Secret, which is operated by Limited Brands Inc,
could not immediately be reached for comment.

My babe just sent me this news......." WE BETTER WATCH THONGS OUT " lmao
BTW Axel Rose's ex girlfriend "Stephanie Seymour" was in Vicky's catalog??? she is my early 90's supa idol !!!!

I love browsing your blog because you can constantly bring us new and awesome things, I think that I ought to at least say thanks for your hard work.